Sorry! You missed San Antonio Symphony - Back To The Future at Majestic Theatre 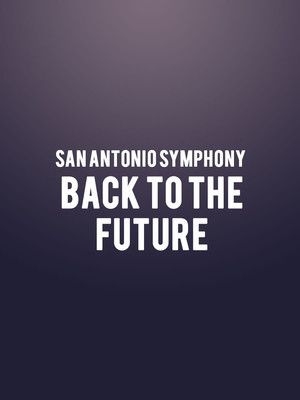 San Antonio Symphony - Back To The Future

Why See San Antonio Symphony - Back To The Future?

Great Scott! It's Back To The Future In Concert

Experience Robert Zemeckis' whirlwind 1985 sci-fi masterpiece anew during the San Antonio Symphony's special HD screening of the cult hit film with live orchestral score accompaniment. Written by frequent Zemeckis collaborator Alan Silvestri, the musical maestro behind the sounds of Who Framed Roger Rabbit, Forrest Gump and numerous other films, the Back To The Future's thrilling score seamlessly interweaves with iconic Huey Lewis and the News hits 'Power of Love' and ' Back In Time', as well as a story immortalised in pop culture as one of the best sci-fi adventures ever made.

When streetwise Cali teen Mary McFly (played by Michael J. Fox) is thrown back in time to the 50s after an experiment by his eccentric scientist friend Doc Brown (portrayed by Christopher Lloyd) goes hilariously wrong. Back in the fabulous 50s he encounters his own parents at his age. But time is a fragile construct, and Marty must fight to make sure his parents fall for each other or he won't exist, as well as get back to his own time to save Doc Brown in a time-traveling DeLorean!

Sound good to you? Share this page on social media and let your friends know about San Antonio Symphony - Back To The Future at Majestic Theatre.