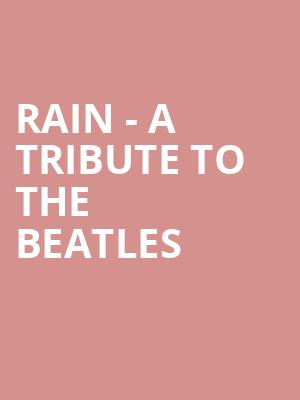 Photo by Ray on Unsplash

Although purists might sneer at this concert/theatrical experience, there's no denying that, as cover bands go, this is one of the best.

Why See Rain - A Tribute to the Beatles?

Together longer than The Beatles themselves, RAIN has mastered every song, gesture and nuance of the legendary group, delivering a totally live, note-for-note performance that's as infectious as it is transporting. From the early hits to later classics that The Beatles never got the chance to play live - including the most complex and challenging songs - this adoring tribute will take you back to a time when all you needed was love, peace and a little help from your friends!

No other rendition of The Beatles' music comes close to this level of performance, which has taken years of mastery and attention to detail that is unmatched. From the early days of The Beatles' appearance on the Ed Sullivan show in 1964, through Shea Stadium, the Sgt. Pepper era and on to the Abbey Road years, the RAIN captures it all flawlessly.

Suitable for audiences of all ages

Two hours and 20 minutes including one 20 minute intermission

What a fabulous show! At first, it seemed like I was back in the 60’s... more

Sound good to you? Share this page on social media and let your friends know about Rain - A Tribute to the Beatles at Majestic Theatre.