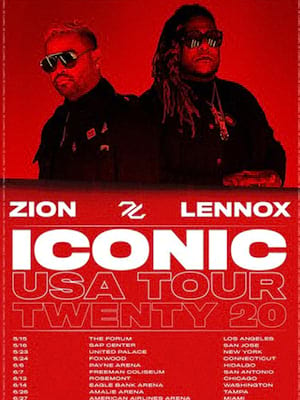 Our 20th Anniversary celebration marks a special time in our career, and we are looking forward to putting on an amazing show for our fans throughout the US

Reggaeton duo Zion y Lennox made up of Flix Ortiz and Gabriel Pizarro released their debut album 16 years ago in 2004 after forming as a music duo in 2000. This year marks 20 years of them making music together and what better way to celebrate two decades of sizzling reggaeton than a tour across North America?

The duo has released three studio albums together including their latest 'Motivan2' which was released in 2016 and have had hits with singles 'Doncella' and 'Pierdo La Cabeza.' Both have also had solo hits. Together, the duo has received many award nominations and won the 2016 Billboard Latin Music Award for Latin Rhythm Songs Artist of the Year and seven American Society of Composers Awards for Latin Award-Winning Urban Songs.

Sound good to you? Share this page on social media and let your friends know about Zion y Lennox at Freeman Coliseum.