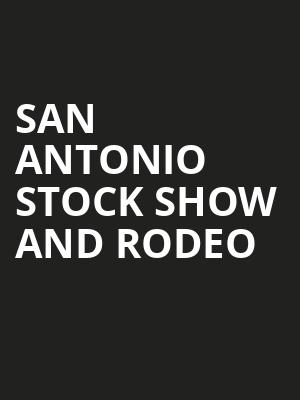 The San Antonio Stock Show and Rodeo doesn't play around, y'all.

In 1949 the Joe and Harry Freeman Coliseum first opened to the public as a home for the wildly popular livestock expositions for the youth of Texas. A year later, the first ever San Antonio Stock Show & Rodeo debuted to the public and drew in a then unheard of quarter of a million visitors upon opening. Transferring to the AT&T center in 2006, the prestigious event continues to grow, drawing in over 200 million visitors annually.

Alongside its animal, agricultural and family-orientated entertainment like pig races, cowboy bootcamp, a petting zoo, pony rides, carnival games and rides, the SASSR has become synonymous with full-scale stadium concerts featuring the biggest names in Country music. Check out the program below for a comprehensive list of performance dates. All other dates are general entry only - please check with your chosen venue for specific show times/general entry times.

Sound good to you? Share this page on social media and let your friends know about San Antonio Stock Show and Rodeo at AT&T Center.