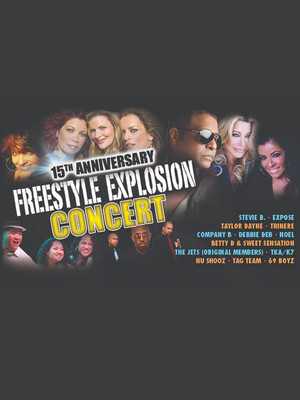 Get ready to dance with Nu-Shooz!

The biggest names in'80s freestyle music come together to celebrate the tour of Freestyle Explosion, the annual concert fixture dedicated to keeping the music of the urban city landscape alive and kicking. Headlining the event, husband and wife duo, Nu Shooz perform alongside a jam-packed line-up of legends including Expose, Stevie B, Lisa Lisa, Seduction, Trinere, Linear, Nocera, and Lisette Melendez.

Hailing from Portland and formed in 1979, Nu-Shooz feature husband and wife duo, multi-instrumentalist John Smith and singer Valerie Day. During their career, they released their debut album in 1982 and since then have released a total of six. The band quickly became a must-see nightclub show around their hometown, landing slots at some of the most popular clubs in the state. Since their split in 1992, due to being dropped by Atlantic Records, Nu-Shooz found each other once again in 2007 and have peaked in their career, releasing some of the best albums and performing some of their best concerts.

Sound good to you? Share this page on social media and let your friends know about Freestyle Explosion at Alamodome.